Prom calls for an elegant ‘do. Many girls choose to top their tresses off with a tiara, but if that’s just a little too much sparkle for you, consider a prom headband.

I’ve seen so many headpieces that I adore on the red carpet; it’s hard to narrow it down to just a few that would be great for prom. From Nicole Richie’s retro-inspired headband to Hailee Steinfeld’s dainty row of crystals to Lea Michele’s layered look… there are so many to choose from.

So, what’s the secret to choosing the right headpiece for your dress? It either has to match your hair color or your dress. You’ll see Charlize Theron’s light blonde hair is prettied up with a white crystal band, while Lea Michele’s dark locks are accessorized with a black three-row band.

But, then we’ve got Hailee Steinfeld sporting a white crystal band against dark locks that plays perfectly off her champagne-colored dress, and Nicole Richie’s gunmetal headpiece that compliments her dress.

Check out these photos of my fav celebs in formal headbands and see which look would work the best with your prom dress.

Ways to Wear a Prom Tiara 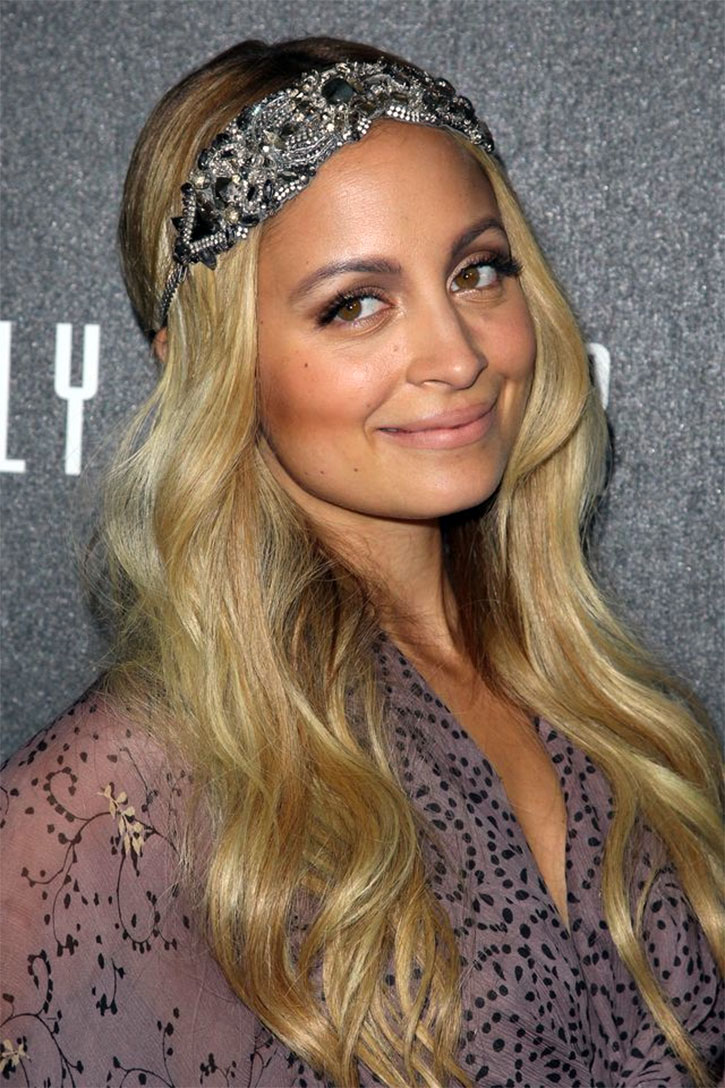 I just can’t get enough of Nicole Richie’s headbands! Even though Nicole is pretty petite, she rocks this large retro headband effortlessly. I love how the appliqué is placed at the top of her forehead, and her locks are long and loose.

See more of Nicole’s style in our gallery of Homecoming Hair Styles for Short Hair.

Next, Heather Lind’s headband with an updo.

Beaded Headband With an Updo 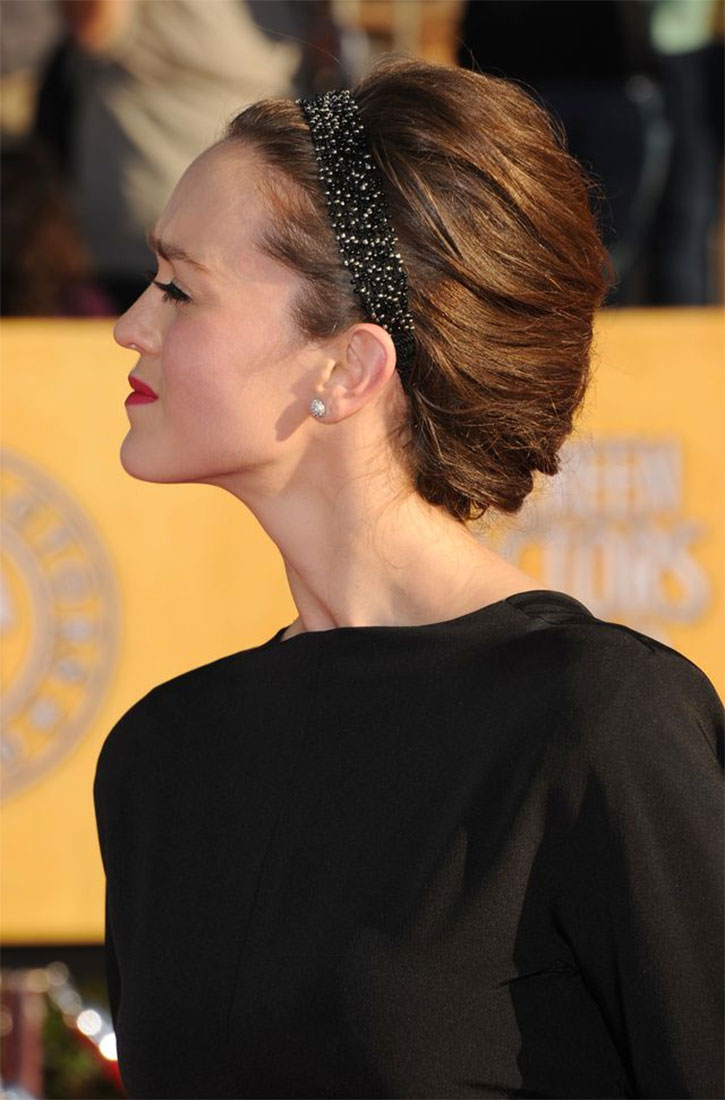 Actress Heather Lind looks flawless with this dark crystal headband. It matches her dress and doesn’t compete with her chestnut locks. The headband is a perfect addition to her updo- it’s holding up her locks while serving as the starting point for an elegant pouf.

Jaime King has managed to match her headband to her dress and her locks. The white and gold colored jewels pick up all of the subtle highlights in her golden hair, while the black band peeks underneath and pays homage to her sleeveless dress.

Jaime King has been wearing a lot of headbands on the red carpet lately. Next, check out her dainty crystal band.

A formal headband combined with baby pinned-up braids always reminds me of a runway model. Jaime King’s rhinestone piece is subtle against her blonde locks, but still sparkly enough to get noticed by the camera flashes. 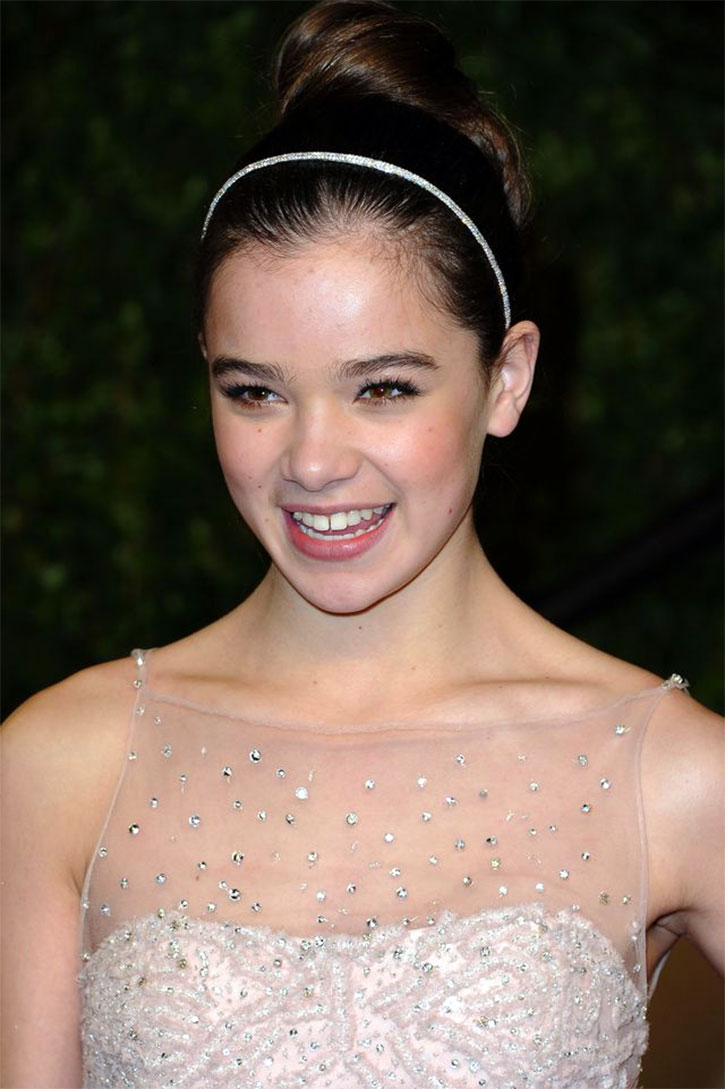 Even though Hailee Steinfeld has dark cocoa-colored hair, she pulls off this thin silver headband flawlessly. The secret? It’s not too thick, so it’s not overwhelming her updo. It’s also a similar hue to her dress, so the two compliment each other nicely.

Next, how to wear a headband with short hair like Evan Rachel Wood’s.

If your hair is cropped super short, you’re probably no stranger to headbands. They not only keep your hair out of your face but can save you when you’re having a bad hair day. Evan Rachel Wood’s formal headband is very simple- a medium satin band that holds back her hair and matches her gown.

Prom Hairstyles for all Hair Types. 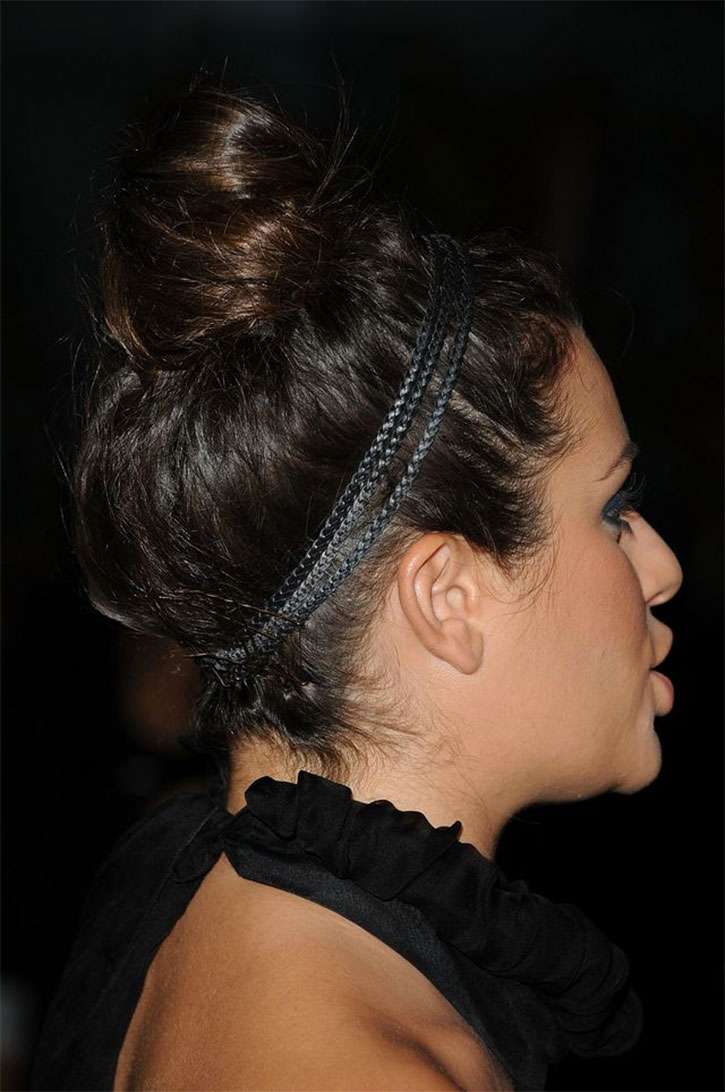 Even gals with bangs need a style change up every now and again. Lea Michele swept her dark locks up into a loose knot, then held back her bangs with a three-string braided headband. She secured it with more than a few bobby pins just above the nape of her neck.

The headband is a few shades darker than her hair, making it a subtle but texture-rich hair accessory for this diva.

What Prom Necklace Should I Choose?
Next Post: Rolex: A History of Luxury Watches